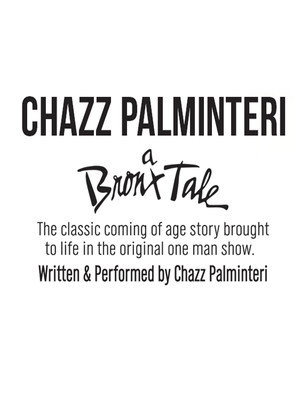 The original one man show that inspired the Broadway musical

The Original One Man Show

The inspiration behind the 1993 movie, A Bronx Tale is Chazz Palminteri's (The Usual Suspects, Modern Family) enthralling coming of age tale set on the streets of the mob-controlled The Bronx of the 196os. Now also a hit Broadway musical touring the country, catch the man himself telling his story right up close and in person! This one man show has been staged both on and Off-Broadway, and this year, Palminterri is taking it on tour for a very limited number of dates.

The story follows the fortunes of Bronx kid Calogero, who is taken under the wing of local mob boss Sonny. As Calogero grows older, and heads ever deeper into Sonny's underworld, his father must try and wrestle him away from a life of crime. A showcase of Palminterri's enviable theatrical talent, the play requires him to inhabit 18 separate characters.

Sound good to you? Share this page on social media and let your friends know about A Bronx Tale - Chazz Palminteri at Mccallum Theatre.