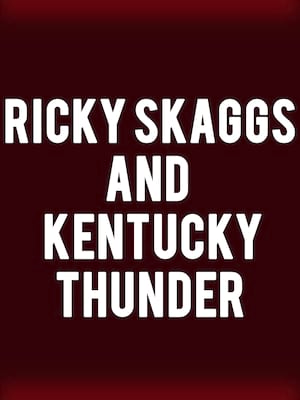 Ricky Skaggs struck his first chords on a mandolin over 50 years ago and with Kentucky Thunder, his band of virtuoso pickers, he leads the revival in roots music.

Country and bluegrass musician Ricky Skaggs is a singer as well as master of instruments including the mandolin, fiddle, guitar, mandocaster and banjo. The Kentucky born musician started his lifelong relationship with music at the young age of five, since then he has made a name for himself as one of the best country musicians out there and has been inducted into the Musicians Hall of Fame and Museum and the Country Music Hall of Fame.

Sound good to you? Share this page on social media and let your friends know about Ricky Skaggs and Kentucky Thunder at Mccallum Theatre.