Sorry! You missed Piaf! The Show at Mccallum Theatre 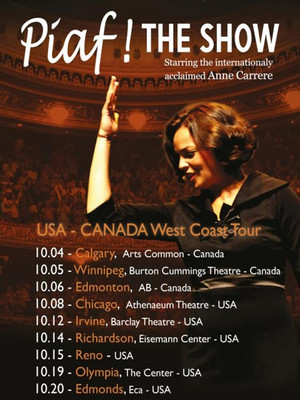 Why See Piaf! The Show?

The life of Edith Piaf is brought to life in Piaf! The Show, a part concert, part musical, centered on an extraordinary central by French singer Anne Carrere. Inspired by the Oscar-winning movie La Vie en Rose, which starred Marion Cotillard, this two act show explores the rags- to-riches story of 'The Swallow of Montmartre' with some of her best known songs and a photographic projection of previously unreleased Parisian snapshots.

Piaf! The Show first debuted in 2015 in France on the centennial anniversary of the singer's birth. It has since played to acclaim across the world, including a performance at Carnegie Hall.

Images are property of Piaf! The Show

Seen Piaf! The Show? Loved it? Hated it?

Sound good to you? Share this page on social media and let your friends know about Piaf! The Show at Mccallum Theatre.